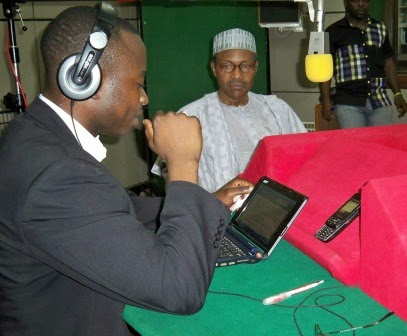 Last week we had to stand down the continuation of this interview I had with the President-elect way back in 2010 on my now rested radio show in Kaduna when he was gearing for the 2011 election. We now continue with it. Note must be made here that we had a studio audience of journalists and civil society people, to add to the robustness of the interaction. Please enjoy.
Me: Between December 31, 1983, and August 27, 1985, when you were removed, your government strong-handedly beat order and compliance into Nigerians – that was one of the reasons Babangida gave for your ouster: strong-handedness. Now this is 21st century Nigeria; democracy is being installed. How much of a democrat have you become to be able to inspire order and compliance to accountability and transparency? You’re of the military stock and they say “once a soldier always a soldier.
Buhari: Yeah well, even soldiers are working, or are supposed to work, under the constitution of the country. So, having joined partisan politics in April 2002, from then on, my experience is this: firstly, whatever we do we must not contradict the constitution. Secondly, the INEC Act which is derived from the constitution itself. And then one of the most important jobs of the INEC is to register political associations as political parties; and political parties are the legitimate ways of going into electoral offices, from councilor to president. Then for every election, there is the Electoral Act. There’s the Electoral Act 2002 for the 2003 elections. There’s the Electoral Act 2006 for the 2007 elections. Now there’s another Electoral Act (2010) for the 2011 elections. All these we have abided by; all the rigmarole… which took us fifty months – thirty, 2003; twenty, 2007 – contesting the legitimacy of the so-called government of the PDP during that time. All this was done through this process and system: the constitution, the electoral acts, party constitution and manifestoes. So, really, even when there was this noise about reform (electoral reform of Justice Uwais)… what are we going to reform? Because the election observers, of international repute, condemned both the 2003 and 2007 election; and we who have been in court for fifty months proved – the documents are now public documents – that the elections were not conducted according to the laws.
Me: (Cut in) Well, we will come to the issue of elections during the course of the programme. However, what you’re saying is that indeed you are a democrat because you’re ready to subject yourself to the constitution and other laws of the Federal Republic of Nigeria; and that you’re able to inspire such compliance and order by so doing. Now we’re going to give our studio audience some room to ask questions, but while they are getting set, let me ask you just one simple question. You’re contesting for president. We want you to give us a peek into your blueprint for installing an accountable and transparent and also corrupt-free system and government, come May 29, 2011, should you emerge president.
Buhari: Well, I have told you the system as it is: the constitution, the electoral act, which ought to lead to a successful election and the installing of legitimate government. Well, with a legitimate government being installed, then the question again of the constitution… and running of ministries and so on ought to be according to the rules and you’ve the institutions that supervise that. Now, those institutions must be made efficient and allowed to work. For example the police: the police must be capable of protecting the society and prosecuting those who break the law. Other law enforcement agencies are supposed to do their own parts of it… and the military, when things are bad, you know, as prescribed by the constitution. So really, there ought to be no problem. This is the way I see it. People should go by the book literally. It’s not taking away initiative; it’s not being inflexible. It’s just being accountable and transparent.
(Questions from the audience)
Suleiman Ahmed: My question has to do with the issue of credibility in this country. People are being elected not because they are credible or because of their track record. Given your own track record of credibility, how will you work successfully, if elected, with others of questionable credibility who will also be elected into various offices at different levels?
Maji Peterx: There’s been a lot of insinuation that all the parties you’ve joined, it’s because you want to be flag bearer. You’ve done that twice in ANPP and now you’re going to CPC, and the whole machinery of the party is revolved around the integrity of Gen Buhari. So, if politics is a game of all those who are involved in it, we still don’t know the kind of people you’re going to work with. And again, why are you always in parties to contest? Is there no team of people you could rely on and be like a godfather to in the Nigerian tradition?
Moh’d Suleiman Tola: Your Excellency, you talked about certain investigations while you were military Head of States. If Nigerians give you their mandate in 2011, do you intend to dwell much on probing your predecessors? And what are your priorities in the order of their ranking?
To be continued…